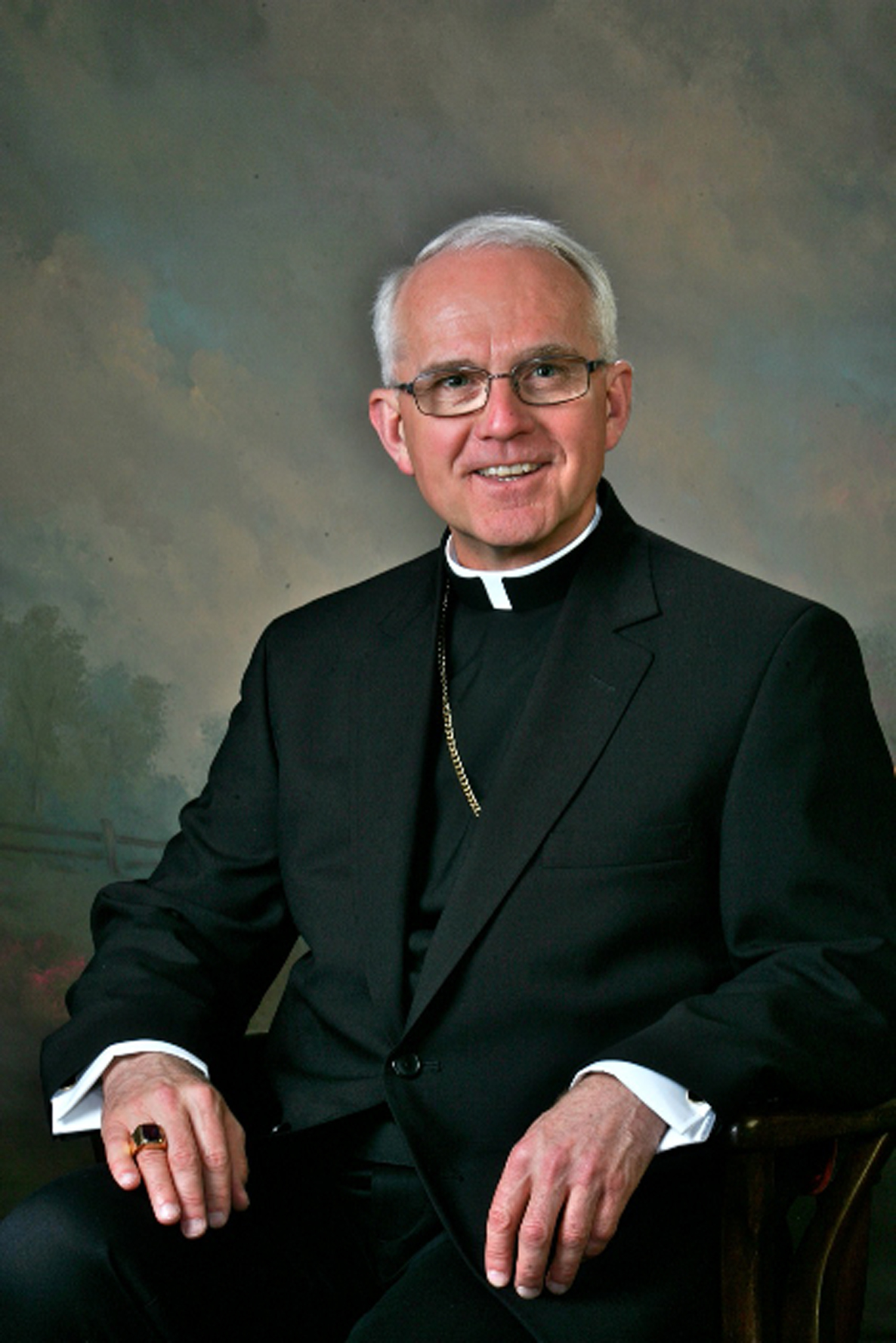 Bishop LaValley, the second of six children of Ronald (deceased) and Doris LaValley, is a native of Mooers Forks, NY and was raised in St. Ann's Parish. He was born on March 26, 1956 and completed his primary and secondary education at Mooers Central in Mooers, NY and Northeastern Clinton Central School in Champlain, NY. He received a B.A. from the University of the State of New York and a Certificate of Studies in Philosophy from Wadhams Hall Seminary-College. Prior to his entrance into Wadhams Hall Seminary-College in January 1983, Bishop LaValley served a six-year tour of duty with the United States Navy. He completed the Pre-Theology Program at Wadhams Hall in May 1984 and received his Master of Divinity degree from Christ the King Seminary in East Aurora in May 1988. The bishop was ordained to the Diaconate on February 27, 1988 and to the Priesthood on September 24, 1988 by Bishop Stanislaus J. Brzana. Upon ordination, he served as deacon and parochial vicar at the Church of the Sacred Heart in Massena. During this time, he was named as the Associate Secretary of the Marriage Tribunal and was elected to serve on the Council of Priests. In 1992, the bishop began studies in Canon Law at St. Paul's University in Ottawa, Ontario, Canada where he was awarded his M.C.L. and J.C.L in May 1994.

Upon the completion of his graduate studies, Bishop LaValley was named as Administrator of St. Peter's Church in Hammond and St. Patrick's Church in Rossie and was appointed Adjutant Judicial Vicar. In 1996, Bishop Paul S. Loverde named him Episcopal Vicar for Diocesan Services and Chancellor of the Diocese of Ogdensburg with residence at Wadhams Hall Seminary-College.

In August 2004, Bishop LaValley was relieved of his duties as Episcopal Vicar and Chancellor by Bishop Robert J. Cunningham, and appointed the Bishop's delegate to implement and oversee compliance with the Charter for the Protection of Children and Young People. In this capacity, he continued to serve as Chairperson of the Diocesan Review Board. On May 28, 2009, the College of Consultors elected Bishop LaValley as Diocesan Administrator, upon the installation of the Most Reverend Robert J. Cunningham as Bishop of Syracuse. The bishop continued as the Diocesan Administrator until his Ordination and Installation as the 14th Bishop of Ogdensburg on Friday, 30 April 2010. 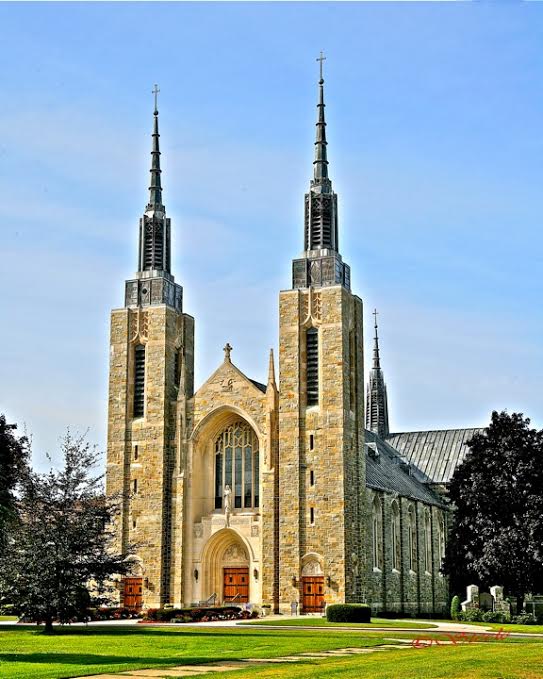 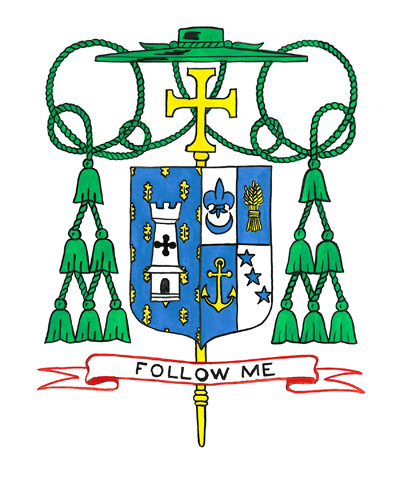 The episcopal heraldic achievement, or as it is more commonly known, the Bishop's Coat of Arms, is composed of a shield with its charges (symbols), a motto scroll and the external ornaments. The shield, which is the central and most important feature of any heraldic device, is described (blazoned) in 12th century terms that are archaic to our modern language. By heraldic tradition, the arms of the Local Bishop (called the "Ordinary") are joined to the arms of his jurisdiction, in this case, the arms of the Diocese of Ogdensburg.

The left side (sinister) of the Coat of Arms represents the Diocese of Ogdensburg. It is composed of a blue field with a scattering of oak leaves and a silver castle tower with a window in the form of a cross. These arms of the See symbolize its name: "ogden," which is derived from "oakdene," represented by the oak leaves, and "burg," which is represented by the tower, a common symbol in heraldry for a fortress or a fortified city.

Ogdensburg was the site of the French mission of La Presentation founded in 1749 by Abbe Francois Piquet to minister to the Iroquois. After the demise of New France, the British refurbished Fort La Presentation and renamed it "Fort Oswegatchie;" it was held by them until 1796. The settlement that grew up about the fort was named after Samuel Ogden (1743-98), a New Jersey lawyer who bought land there. This makes the oak leaves on the diocesan impalement even more appropriate because the Ogden family bear oak leaves as an integral part of their coat of arms. During the early part of the War of 1812, Ogdensburg was important on the American line of defense and on February 22, 1813 both the fort and the village of Ogdensburg were captured and partly destroyed by the British. The village incorporated as "Ogdensburgh" in 1817, was chartered as the city of Ogdensburg in 1868, and became the cathedral city for the new Diocese of Ogdensburg in 1872.

The right side (dexter) of the Coat of Arms contains the Bishop's personal arms reflecting his familial and personal background. The silver crescent honors the Blessed Virgin Mary, in her title of the Immaculate Conception, the patroness of the Diocese of Ogdensburg. Immediately above the crescent is the fleur-de-lis, recognizing the Bishop's French heritage and honoring the Blessed Lady as the "lily of the thorns.

To the right is found the symbol of a bundle of wheat. This recognizes the Bishop's family roots in farming. At the same time, it carries Eucharistic overtones calling our attention to Jesus Christ, the Bread of Life--Food for the journey.

Immediately below the crescent an anchor is situated. The anchor is a reminder of the Bishop's service to the nation as a sailor in the Navy. The symbol also points to the Bishop's deep devotion to Mary, the Mother of Priests, our Lady of Hope.

To the right of the anchor is found three stars arranged diagonally, displaying a portion of the LaValley Family Crest.

For his motto, His Excellency Bishop LaValley has chosen Follow Me. In this phrase, found in all four Gospels, we hear Jesus' invitation to His apostles and disciples to follow Him. By the use of this phrase, His Excellency expresses his firm belief that we are all companions on a faith journey. He prays that his leadership as Shepherd of the Diocese of Ogdensburg will provide sure and compassionate guidance to the Kingdom for all God's holy people entrusted to his care

Deans of the Diocese

The Diocesan Pastoral Council consists of various members of the Christian faithful including clergy, religious, and lay men and women. Membership is chosen so that the Council will reflect the diverse regions, social conditions, and professions of the Diocese as well as our various apostolates. All members must be active, practicing Catholics.

This Diocesan Pastoral Council has been established so that it may investigate under the authority of the Bishop those things which pertain to pastoral works, ponder them, and propose practical conclusions about them.

The purpose of the Council of Priests is:

1. To provide a forum for the full and free discussion of all issues of pastoral concern in the diocese.

2. To aid the diocesan bishop in the governance of the diocese according to the norm of law so that the pastoral welfare of the People of God committed to the bishop with the cooperation of the priests may be accomplished as effectively as possible.

3. To search for and to propose ways and means for effective pastoral ministry.

4. To be representative of all the priests of the diocese in their unity and diversity.