BOOK REVIEW: Real Presence: What Does It Mean and Why Does it Matter? 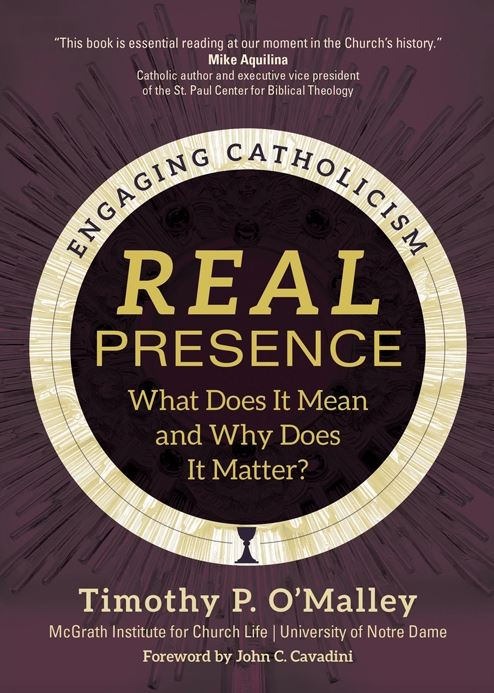 Real Presence: What Does It Mean and Why Does it Matter?, by Timoth P. O'Malley,  may be a small book , but it is densely packed with information countering modern obstacles to recognizing Christ's Real Presence in the Eucharist.  The author suggests three prominent issues that cause confusion and keep almost 70% of Catholics from recognizing the Real Presence: An overly physical or technical explanation of the Real Presence, a lack of Eucharistic reverence, and a false dichotomy between the Eucharist reverence and recognizing Jesus in the in the hungry, thirsty, and poor in our midst.

There is a lot of confusion and misunderstanding of the meaning of Real Presence. Some err on the side of thinking the Eucharist a mere symbol, others err on the side of materialism focussing on Eucharistic miracles such as bleeding hosts.  Even the Pew Study on the Real presence used imprecisely worded questions like "Do the bread and wine become the actual (as opposed to the substantial) Body and Blood of Christ. Doctrine and precise language are important because they can "help us to encounter Christ in a deeper and profound way" as well as help us to explain what and why believe.

A lack of Eucharistic reverence can also be an obstacle to recognizing Christ in the Blessed Sacrament. Hymns that speak of Eucharist as merely bread and wine, not body and blood, an over-emphasis on the meal aspect of Eucharist, resulting in prayer and actions that downplay faith in the Real Presence.

The book then continues to point out the real presence as found in scripture, in the Church Fathers, Thomas Aquinas' hymn Lauda Sion, which is the sequence for the feast of Corpus Christi, and concluding with examples of witnesses who shared in their writings the love of Jesus present in the Blessed Sacrament.

This is a wonderful little book to read slowly and savor, and perhaps use as as source of meditation and reflection in the presence of the Eucharist.

Archive of Past Reviews